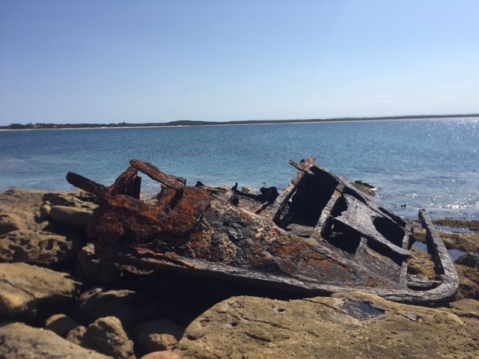 Our family of three and a bit are approaching the last days of our annual beach house holiday. I am keen to explore the bush and beaches of a neighbouring area. But the other two want to laze about. Nitro the Two Toned Cavoodle is always up for an adventure but I don’t want to be restricted by signs that forbid his kind. So he sadly watches me through the fence as I drive off. I find a nice beach but as there isn’t any more surf than the one we’re staying at, I decide instead to take a little bush walk. I choose the shortest – ‘The Wreck Walk’. It isn’t long before I notice a father and his two fat sons walking ahead of me with fishing gear. They stop and the father uses his fishing rod to attack a giant spider web and its large but out of the way inhabitant. He justifies his actions to his protesting sons by saying that it’s ok as it’s a common spider. I pass him with a curt, “Excuse me”. He’s surprised by this and jumps out of the way. “Sorry mate.” I continue on as quickly as I can, trying to put some distance between myself and the Spider Slayer. I come to a sign pointing the way to the shipwreck. There is some information about it. I read quickly, discovering that in 1928 a mighty steamer christened the SS Merimbula hit the rocks at Whale Point. I want to read on but the Spider Slayer and his obese offspring are waddling my way. So I walk down the sandy path and exchange bush for a mass of volcanic rocks and the Pacific Ocean. The rocks are randomly scattered about, chaotically heaped  on top of each other. In the distance I see some that seem redder and more sharp edged than the others. As I get closer, I realise that these are the rusted remains of the steamer. I walk around them, fascinated by how they have now become part of the natural landscape. These are the original Sculptures by the Sea, erected decades before viewing twisted rusty metal was an annual event in Sydney’s eastern suburbs. I start to imagine what it must have been like on that stormy night in 1928, bodies being thrown about like rag dolls, crashing onto the rock pile. I notice that some of the rocks have holes that are eerily reminiscent of skulls. This unsettles me and I feel an uneasy sorrow for those who lost their lives that night. I notice that the Slayer and his brood have walked around to the other side of the point to try their luck at slaying some sea creatures. So I decide to head back to the path, my heart a little heavier. I return to the sign. As I am no longer rushed, I read it properly. In doing so, I discover that although the steamer did hit the rocks, it was stable enough for the crew and passengers to stay there overnight. Once the storm passed the next day, they all calmly boarded their life rafts and rowed about a hundred metres to the closest beach. There was no loss of life. Part of me feels disappointed. Another part feels ashamed about the part that feels disappointed. The rest of me just feels foolish. Even though he’s not with me, I imagine my thirteen year old son laughing and pointing as he says: “Ah ha – get wrecked!” This is a current expression that he and his peers use to taunt those who have suffered some sort of failure. Usually, I hate it. But under these circumstances, I concede that it actually does work on a number of levels. 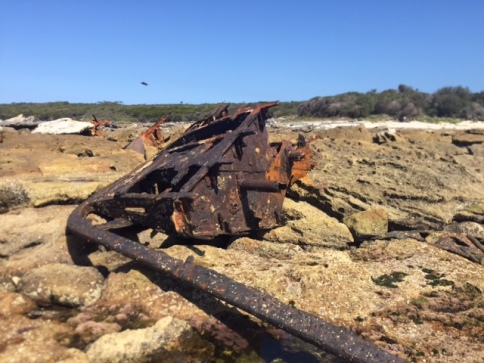