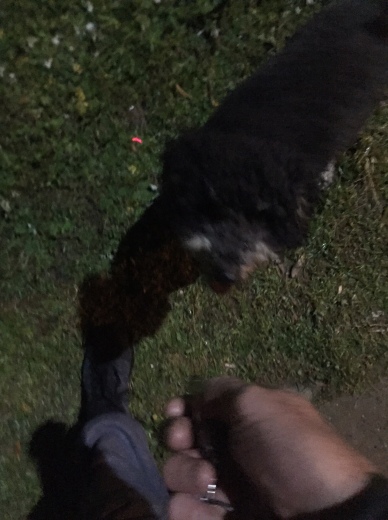 Nitro the Two Toned Cavoodle first discovered the joys of the dot one night on Bondi Beach. It was a green dot generated by a laser pointer belonging to the owner of another local Cavoodle (who doesn’t really look like a Cavoodle), named Poppy. The novelty of chasing a green dot zipping along the sand had worn a bit thin for Poppy. But to Nitro it was a revelation – a fast green light that could never be caught. The other owner and I were amused by Nitro’s gung ho efforts to catch the uncatchable. After being informed where I could buy one, I didn’t. At least not for nearly two years. But when I finally introduce Nitro to the red dot one night at the beach, he goes nuts. I point it in front of his face and then whip it along next to the water. Nitro takes off, galloping like a fuel injected rabbit, grains of sand flying in his jet stream. He comes to expect it every night and is disappointed if I leave the pointer behind. It doesn’t take long for him to figure out that the dot is somehow connected to the cylindrical shiny thing I hold in my hand. He even rises up onto his hind legs and stands for several seconds in gleeful anticipation of the shiny thing emerging from my pocket. But, unfortunately, the shiny thing chews up batteries and Nitro the Two Toned Cavoodle is deprived of dot chasing over the several months in which I fail to replace dead batteries. When my son and I finally take him out one night and resurrect the dot, there is not a more excited Cavoodle on the planet. He goes hard. My son especially enjoys swinging the dot from side to side, watching Nitro twist and turn. Unfortunately, this costs me over a hundred dollars for a vet visit where it’s decided that our over overexcited dog has pinched a nerve in his back. So the dot is once more retired for a spell. When it re-emerges, its trajectory is considerably straighter. The plus side of this is I discover a new game – ‘Point the Dot at Nitro’s Bullseye Bum Hole.’ This is a challenge but every so often the dot briefly hits the galloping target – as if a SWAT team sniper is lining up a shot. Once we finish our dot games on the beach, Nitro heads straight for the water tap on the walkway. I press the button and he gulps and slurps, replenishing fluids drained by the dot. He then coughs and splutters, redirecting water that’s gone down the wrong way. Nitro the Two Toned Cavoodle then looks up and smiles, delighted to have had yet another dot dalliance on Bondi Beach.