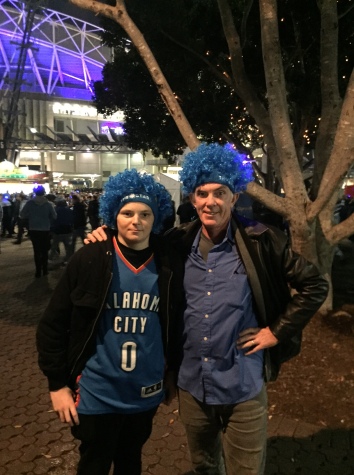 As an Aussie Rules fan, Rugby League is a game I dismiss as a bunch of no-neck gorillas running into each other. Not nearly as exciting as tall lean athletes leaping over each other. Still, there are at least three League games a year that I make an effort to watch: the State of Origin series. Billed as ‘State versus State, Mate versus Mate’, it is essentially an NRL all stars game, with each team selected based on where the players originated from. This allows for members of the same club to be facing off against each other, playing for State pride. And it does seem to make a difference. These games can be brutal, as was the case with the first one of this year’s series. And remarkably, ‘my team’ of New South Wales managed to beat the previously dominant Queensland in Brisbane. It was so exciting that I considered something I never have – buying tickets to the next game in Sydney and possibly witnessing the ‘Blues’ beat the ‘Maroons’ and take out the series. My son had been talking about wanting to go one year and I’d dismissed the idea. But now I have the opportunity to surprise him. So the day after the first game I fork out nearly three hundred bucks for seats up in the heavens. I don’t tell my son about it, not until a couple of hours before the game. He is shocked. And elated. So off we go, driving to the station then catching a train out west. But the train full of footy fans stops on its tracks, somewhere between stations. The mood remains surprisingly good. After some time, there’s an announcement that the reason for the delay is a police operation at Strathfield Station. A woman in our carriage elaborates – apparently someone has thrown themselves onto the tracks. This is a horrifying thought and I imagine the bloody mess, with police and paramedics attending to the scene. I take the delay as an opportunity to practice a bit of mindful patience – there’s nothing I can do so no point getting worked up about it. Hopefully we’ll get there in time. But if we don’t – we don’t. Finally, the train slowly chugs forward, to the cheers of its passengers. We crawl past Strathfield station. I can see a bunch of cops. They are standing around a man sitting on platform bench, black scuff marks down his back. The guy’s still alive! I am shocked and relieved. The Maori Maroons supporter behind me does not share my sentiments. “They should of just run over the c*nt.” Over an hour after we left, we finally pull up to Olympic Park station. We get swept up in a mostly blue tide. There are dozens of food stands. We grab a couple of chicken rolls and head up to our seats. ‘Up’ is very much the operative word. We climb a concrete spiral ramp that appears to be leading towards Heaven. At last we make it to the top and find our seats, careful not to teeter to the wrong side and tumble down and over rows of  disgruntled spectators. Once seated, the site is truly remarkable. One of the reasons I decided to spend a few hundred dollars to watch a code I’m not especially passionate about is that I wanted to see this former Olympic stadium full. I have been at several AFL finals where, despite there being over forty thousand fans, the place looked half empty. But not now. There are over eighty thousand bodies packed in and the atmosphere is electric. After the national anthem (they should really have the two state anthems, should such songs exist), there is an almighty roar as the game begins. It is an exciting first half and too easy to get caught up in the crowd’s antics – chanting ‘Buuuulllshit’ at every dubious call and ‘New South Wales, New South Wales,’ to lift the spirits of the warriors in blue battling below. I also discover that binoculars are a very handy accessory for rugby league. The game moves at a pace that is easy to follow and it’s great to be able to see the player’s faces. Binoculars also prove entertaining between play to check out the sea of blue wigged die-hards camped at one end of the ground. After the first half, our boys in blue are comfortably on top and it looks like victory will be ours. But, as the cliché goes, it turns out to be ‘a game of two halves’. The proud and talented Maroons fire up and, thanks largely to the kicking skills of a Queensland legend playing pretty much with only one arm, the visitors steal the match by two points. Tens of thousands of disappointed fans trudge down the spiral ramp towards Hell. Or in our case, the toilet block. Just outside, my son sees a blue wig abandoned on the ground. He picks it up, dusts it off and puts it on. I jostle in and out of the toilets and then take a photo of my son with the blue lit stadium in the background. A Queensland fan, oddly wearing a blue wig (possibly also abandoned by a blue Blues fan), offers to take a photo of my son and I, lending me his wig for good measure. So we, a couple of Aussie Rules supporters, now have a shot that marks the time we crossed footy codes and cheered a losing side – and loved it (except maybe the losing bit…)