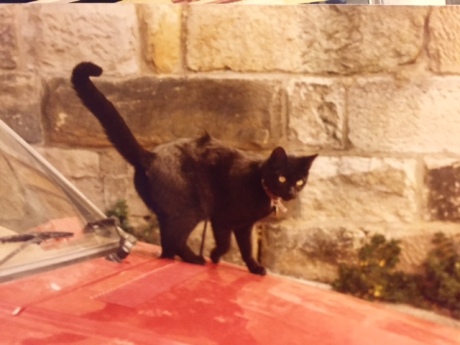 Though we loved her – Petula was a pathetic cat. Often jumpy and slightly unhinged, her life was cut short before she reached her second birthday. She started losing control of her back legs and bowels. The diagnosis was not good. She had nervous system issues and would eventually be paralysed. My wife at the time was extremely upset but agreed that the best option was to have Petula put down. As the whole ordeal was too much for my wife, I took poor Petula to her last vet visit on my own. The process was quick but sad. Thinking that the best way to take my wife’s mind off the departed cat was to get a new one, I asked the vet if he happened to have any in need of home. “As a matter of fact, I got a black female that followed a guy home from the service station.” Hmmm. Intriguing. So he takes me out the back, opens a cage and hands me a sleek shiny black cat. I hold her up in front of me. She stares at me with her gorgeous green eyes. Then, ever so gently, she bites me on the chin. “Oh – you’re such a flirt! Come on then – let’s go.” So Jezebel came into our lives – a very different beast from her predecessor. Far from jumpy, she was one of the most confident creatures I’ve ever encountered. Just as she did from the servo, she would often follow us when we left the house – though never much further than a couple of hundred metres. That’s when she would peel off in pursuit of her own adventures. I suspect she had many. Sometimes we wouldn’t see her for days. Then she’d suddenly pop up, looking well fed and groomed, smelling of perfume. We suspected that we were not her exclusive carers. Then, maybe not quite a year later, she went into heat. Three tomcats lined up along the fence in pecking order. The first was the biggest, meanest and ugliest – a one eyed feral that no cat (or cat owner) dared mess with. The second was most likely a well trained house cat but also fairly burly in size. Last in line was the pretty boy – an all grey teenager who barely looked old enough to pass along his pretty boy genes (though he managed to do so – the litter featuring one grey kitten). So the three of them took their turns, two resting up while the other went at it as Jezebel screamed (having since learned that cat penises are apparently spiked, screaming seems a logical response). When Jezebel finally staggered in for food and water, we figured that she’d had enough. But half an hour later, she was scratching at the door, desperate for more. Turns out she was well named.